I went to my "Manage Your Kindle" page on Amazon today, to send a copy of the J.K. Rowling/Robert Galbraith mystery novel The Cuckoo's Calling to my husband's iPad, and I noticed something new.  There was a notice above the section with the list of my books that said I could sign up for automatic updates when a corrected version of an ebook comes out. Naturally, I clicked OK!

A big advantage of ebooks over print is they can be corrected if errors (typos as well as formatting errors) are found. Newer Kindles even offer a way to report these kinds of mistakes (in the More menu that comes up when you highlight a phrase).  But once the publisher has fixed the mistakes, someone who has already bought that book won't see that fix unless they download the book again.  Amazon will email buyers if the mistake is significant, but then they buyer has to request a new copy. This new feature is a "sign up once, and it's automatic from then on" thing, which is much better.

The number of errors in ebooks from self-publishers is widely variable, depending on the author's attention to detail. The number of errors in traditional books used to be just awful, mostly because of workflow issues, but they have (mostly) gotten better. I have found a couple of typos in The Cuckoo's Calling, though (an excellent book, by the way!). I will have to report them and see how well this new feature works!

Posted by Carmen Webster Buxton at 10:05 AM 3 comments: Links to this post

Finally! The Nostalgia Gambit is now available in iBooks!

Such a time I have had, getting my sixth book into the iBooks store! Finally, it's there! And it only took me over two months of trying.

That was sarcasm, by the way. My experience with this book was a good illustration of the difficulties in dealing with one retailer via another retailer. The folks at Apple don't make self-publishing easy, so I use Smashwords to get my books into the iBooks store.

In the past, Smashwords only accepted MS Word documents formatted with their specific styles. They had a program called the meat grinder that they used to create all the various formats they support (epub, Kindle, PDF, txt, etc). You uploaded your cover image and the Word file, and it took it from there. The books came out kind of vanilla, as far as style, but you got a valid epub file, and that was what made it possible to sell that book on the other retailer platforms. All the major online bookstores except Kindle rely on epub format.

If the epub book had an ISBN and made it into the Smashwords premium catalog (which meant it was well formatted) then it could be sent to iBooks. It sometimes took a week or two to show up but it arrived. Smashwords tries to be responsive to their authors, and when people asked to be able to upload epub directly, they made that possible as of the last day of of 2012.  You can now upload an epub copy and an MS Word copy to Smashwords, and they will use the epub for all the non-Amazon online vendors. The book still has to say “Smashwords Edition” in the front matter, but otherwise it doesn't need to be different from any standard epub file.

Now iBooks has gotten pickier about their book covers. The cover image appears inside the book, as part of the epub file, and it gets uploaded as a separate file for use as on the store's web pages. Apple appears to have changed the rules about what resolution the image can be; too low or too high a resolution, and iBooks won't accept it. Smashwords must have realized this because when I uploaded an epub copy of my seventh book King of Trees, it told me right away that the cover image with the file was too low res. I got that cover artist to supply a different version and the book was delivered soon after and showed up in the iBooks store in a few days.

With  TNG, though, it had passed epub review and gotten into the premium catalog with no trouble, and had shipped to Apple right away, but it never showed up in the iBooks store. I tried emailing Smashwords and they just tried to redeliver it for me.  Still no TNG in iBooks. Eventually, I clicked the link to pull it from Apple, which makes Smashwords send a takedown notice, and once that was sent, I clicked Distribute again, but it would not ship to Apple!  I emailed again, and this time the person investigated and told me the problem was the cover image inside the book was too high a resolution! I got the artist (different artist from KoT) to give me a lower res image and then had that re-inserted into the epub file. Once it was all straight, the book was there in a matter of days.

Posted by Carmen Webster Buxton at 1:57 PM No comments: Links to this post

How do you say “free” in Italian?

It turns out it's gratuito. I looked it up because Amazon has made The Sixth Discipline free in the Italian Kindle store! I'm not quite sure why the book is free in the US, UK, Canadian, and now Italian Kindle stores, and not the others, but I suspect it's because someone in those countries clicked on the “tell us about a cheaper price” link. Brazil, Japan, Spain, Germany, France, and India, it's your turn. Demand my book to be livre, 自由に, libre, kostenlos, librement, and मुक्त! 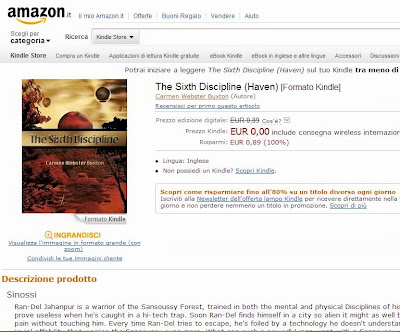 Posted by Carmen Webster Buxton at 1:01 PM No comments: Links to this post

Is it really July already? How did that happen? I am deep into the revisions stage of Saronna's Gift. When I give a manuscript to my writing group, I always have to weigh their comments against my own sense of what the story is about and what tone I am going for. As you can tell by looking at almost any book's Amazon reviews, people have varied taste. What one person finds edgy, someone else will see as too dark. What one reader admires in a character will sometimes make other readers dislike him intensely. This is why Baskin-Robbins makes 31 flavors!

The group has been in existence for about 20 years, although the membership has varied during that time. One “new” member just rejoined the group because she retired and finally has time to write again. Another is new-new, as he had only attended a few meetings.  The folks who have been in the group for years do have some predictability in their critiques of stories submitted. One guy always wants more physical description of the characters. One woman always loves the character everyone else hates. And one bloodthirsty guy always wants the writer to kill off one or more characters.

When I review the comments my fellow writers have made, I look for two things. First is consensus. Is there something everyone hated or thought didn't work?  Because if so, that is something I need to change. The second thing is harder to pin down. Does a suggestion resonate with me, with what I want the story to be? Because it's my story, and no matter how interesting an idea sounds, of it doesn't make the book into the story I want to tell, then it's a suggestion I won't use.

At least not with this book. But I save everything. A writer is really a kind of idea vampire. He or she feeds off chance observations, friends' life struggles, newspaper items, and anything else that comes his way. It's what we do!

Posted by Carmen Webster Buxton at 7:51 PM No comments: Links to this post