Halloween is just around the corner!

So here's a nice Halloween still life in anticipation of the day. I will be home handing out candy for the first time in several years, and I'm looking forward to it.  I love to see what costumes the kids come up with. 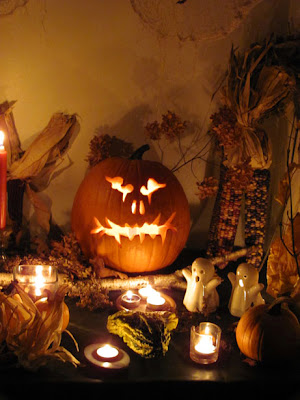 Posted by Carmen Webster Buxton at 12:49 PM No comments:

Email ThisBlogThis!Share to TwitterShare to FacebookShare to Pinterest
Labels: holidays

I gave away a book in Finland! (or possibly Fiji)

The Smashwords retailer report for Apple reports sales (even for free books) by country, so you can see where your books are going. I gave away a copy of The Sixth Discipline to someone in "Country_FI" but I don't know for sure which country that is. My first guess was Finland, but I really don't know for sure.  I can tell "Country_SE" is Sweden because someone there bought a copy of No Safe Haven and since it says they paid 25 SEK, I could Google that and see it's Swedish krona.

Mostly my foreign sales are in the UK, Canada, and Australia but every now and then I see sales in places live New Zealand or Spain, and lately The Sixth Discipline has been very popular in Germany.

In a way, it's a little like traveling to those exotic places to know my books are being read there. Well, not nearly as much fun, but still kind of cool.

Posted by Carmen Webster Buxton at 11:23 PM No comments:

Saronna's Gift has gone to the copyeditor!

I have (finally) finished my structural and character-based revisions to Saronna's Gift, and it's ready for the copyeditor's attentions. I was hoping that I could post the cover but the artist isn't finished with it yet, so instead, here's the first page of the story:


A warm summer breeze caught Saronna’s veil and almost pulled it loose. She stopped to tuck the folds around her face, to ensure nothing showed except her eyes. By the time she had picked up her valise, her father had almost disappeared into the crowd. She hurried to catch up, darting in and out among the throng as fast as she could without attracting notice.

Where were they going? Her father had told her to pack her belongings. That had to mean he planned another attempt to sell her, but he had given her no clue whom he planned to visit today.

Even after their earlier trips to New Jerusalem, the city still disconcerted Saronna. Vendors’ cries, chattering voices, ground cars rolling past, and countless footfalls were enough to distract her, let alone the sight of so many strangers. Faces flashed past, some veiled, some bearded, and disappeared into the mass of humanity, never to be seen again.

She caught up to her father just as he turned suddenly, moving through the tall steel supports of the Strangers’ Gate into the off-world quarter. Saronna had never been there. She gripped her valise tighter as a shiver of apprehension ran through her. Would her talent work as well on an off-world man?

After a block, Saronna noticed women in trousers, walking with their faces uncovered. She looked away in confusion, but the men bewildered her just as much. They walked beside the women, sometimes even touched them. Even elderly men had no beards. The buildings, by contrast, seemed ordinary, although many were very tall. Ten and twelve-story structures dwarfed their neighbors, seeming to shut out the sun.

The crowd thinned first, then the buildings, and Saronna realized they had entered a residential area. After a few blocks, her father made another abrupt turn to enter the arched doorway of a large, sprawling house. Saronna stepped back a pace to study the facade as her father waited at the door. The gray stone house looked very like the ones back in her village except more spread out. Only the recessed archway that sheltered the entrance broke the line of the featureless walls. A few noticeable oddities caught her attention—two small cylinders mounted on either side of the door, and a flat rectangular screen placed at eye level on the right.

That's all for now. I hope to have a cover image to post soon!
Posted by Carmen Webster Buxton at 12:59 PM No comments:

Review: The Golem and the Jinni

The Golem and the Jinni by Helene Wecker

This is a wonderful debut novel! It's nice to find a fantasy in such an original setting, and with such a cool mix of fantastic creatures. If you are as tired of werewolves, vampires, and zombies as I am, this is a good book to try.

For those who aren't familiar with golems, they are creatures of Jewish mythology, created from clay and endowed with a semblance of life by arcane spells known only to learned rabbis. In a way, a golem is the thinking man's Frankenstein's Monster.

Jinnis (aka genies) are familiar from the genie in a bottle tale, and indeed this jinni is not only trapped in a bottle, he is trapped in human form. In spite of that, he has some superhuman abilities. His fingers can generate fire, because his true form is actually fire-based.

The huge influx of immigrants from both Europe and Asia bring the two supernatural creatures to New York city in the early part of the 20th century. The golem ends up in a Jewish neighborhood and the jinni in Little Syria. Eventually, their paths cross (neither of them sleeps, so they are both awake all night) and they know each other at once.

In addition to the eponymous main characters, this novel employs many secondary characters to narrate the story. I had no feeling of “head hopping” because each of them has a distinctive voice and clear motivations. Most of the story is set in the East Side of Manhattan but there are scenes in Poland, the Middle East, and on an ocean liner. Everyone's part in the story is like a piece of yarn that the author knits into the story to create a cohesive whole. The nonhuman characters are just that: not human. They have their own natures and they stay true to them.

There is some resolution at the end, but clearly, a sequel could easily happen, so don't say I didn't warn you. I also want to commend the publisher for an extremely clean Kindle copy of this book. Kudos for no formatting errors!

All in all, an excellent read! The only thing I didn't like was the cover, which I thought found neither appealing nor helpful in determining what the story was about.


View all my reviews
Posted by Carmen Webster Buxton at 1:13 PM No comments:

Writing by the rules

I have belonged to a writer's group for well over a decade. Sometimes called critique groups, writer's groups are one of the most powerful tools a writer can have— if he belongs to a group that works for him. The wrong group is worse than no group, but the right group is a treasure.

Our group has minimal rules. We let writers submit short stories or novels, and the novels can be submitted in chunks as they are written, or as an entire manuscript after they are complete (although those require at least two months reading time). We don't require a specific number of words from every writer, and although we are all speculative fiction fans, we will look at mainstream work or stories in other genres. Critiques are presented at a more-or-less monthly meeting where we go around the room, but unlike some workshops, we don't impose a strict “absolutely no comments or questions while the critiquer is speaking” rule. The writer and other critiquers can speak up if they feel so moved.

The membership has fluctuated between six and twelve members over the years with people dropping out when they get too busy and sometimes dropping back in as their circumstances change. There are a few members who have been in the group even longer than I have. I have stayed in the group because I find it valuable, and sometimes I find myself harking back to other people's comments on mine and other member's stories, some of which we have solidified into “X's rule.”

The Kathy Rule
If possible, don't give minor characters a name. Referring to them by name signals the reader that they have some importance, that they are worth keeping track of. If characters aren't actually important, try to avoid naming them.

The Sharon Rule
In writing spec fic, avoid figurative verbs that could be taken literally in some circumstances. That is, don't say the hero flew across the room, or the heroine vanished from the doorway, unless those characters are literally doing what the verb says. This is especially true in the first few chapters where the reader is figuring out the rules of the world the writer has created.

The Tom Rule
The protagonist must protag! That is, he or she needs to be an active player in his or her own destiny. Circumstances might force an unpleasant choice on him or her, but the protagonist needs to be the one making the choice.

The Carmen Rule
Avoid flashbacks, when possible. This is partly personal preference, but I do generally prefer a linear story line, so long as this allows the story to start at a good place.

Of course, like any good rule, any of these can be broken by a good writer!

Posted by Carmen Webster Buxton at 12:28 PM No comments: