Update: That was FAST! Both copies have been claimed already!

Happy 2018! In honor of my upcoming release of Alien Bonds, I'm hosting a giveaway of two paperback copies of Turnabout. Giveaways can go quickly, so act now if you're interested! Here's the link. 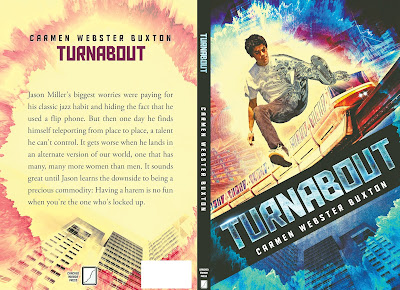 Posted by Carmen Webster Buxton at 5:57 PM No comments:

Smashwords is having a sale! Smashwords is an ebook-only online vendor.  They provide ebooks in pretty much any format; when you buy an ebook from them, you download it to your phone, tablet, PC or Mac. If you want to read it on an ereader like a Kindle or a Kobo, they have an excellent FAQ explaining how to move the book to the ereader (look under the Getting Started heading).

All my books are part of this sale. The novels are half price, and the novella Where Magic Rules is free, as is the first Wakanreo book The Sixth Discipline.

To browse all the free and on sale books, check out this page and note the coupon codes listed which are used to get you the sale price on checkout.
Posted by Carmen Webster Buxton at 11:03 AM No comments:

Check out my post on The Science Fiction Romance Brigade blog!

The Science Fiction Romance Brigade is a group of writers who all write SFR. Their blog has periodic guests posts on assorted topics related to the genre, and today, it's one by me, about the reasons I like to combine romance with science fiction.

The SFRB has a Facebook fan page, if you're interested, and writers can join the Facebook group.  You should check them out f you have any interest, as a fan or as a writer, or both.

Posted by Carmen Webster Buxton at 10:26 AM No comments:

My X-Rays are in!

I finished the X-Ray set up for all my titles! It was actually a fair amount of work, not difficult but a little tedious. Electronic housework, in fact.

As I blogged about earlier, Amazon's Kindle Direct Publishing (KDP) platform has a new tool for indie authors and small publishers (possibly they have something similar for big publishers). The tool creates an X-Ray file for a Kindle book and enables that function for that book.

X-Ray is a very useful feature, especially in certain kinds of books. If you're reading a sprawling fantasy trilogy that has dozens of characters, spreads over a decade or two, and has six viewpoint characters, and suddenly a vaguely familiar character's name pops up, your reading pace can stall as you try to figure who the heck this new elf or mage is.

The feature isn't supported in all versions of the Kindle app. Kindle for PC still doesn't have it, but the Android and iOS versions do. And of course, the newer Kindles all have it (not entirely sure about the ones before the Kindle Touch).

Here's what it looks like on my Voyage when I highlight a character's name: 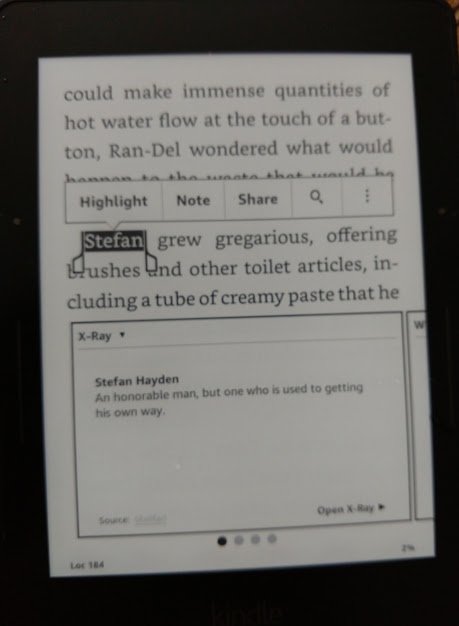 Here's the same function on my Android tablet: About the only difference is in the menu that lets you create colored highlights, impossible (naturally) on an e-ink Voyage screen. 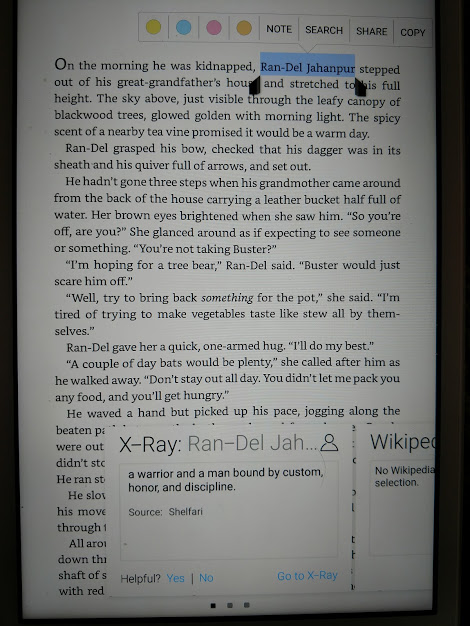 You'll notice the source is listed at the bottom as Shelfari. The new X-Ray tool allows the author/publisher to either write custom descriptions for characters and "terms" or to link to Wikipedia articles. However, before there was a tool, Amazon would use the information that authors and publishers could list in Shelfari, a book-lovers site Amazon bought. I had done that for The Sixth Discipline, and when I had a BookBub promo and gave away 14,000 copies of The Sixth Discipline, Amazon created an X-Ray file from the Shelfari info I had entered. I have since edited and added a lot of the info using the new tool, but I can't see those changes unless and until Amazon support staff push the changes to my copy of T6thD.

Here's what it looks like when I pull up the menu and Select X-Ray (next to Go To): 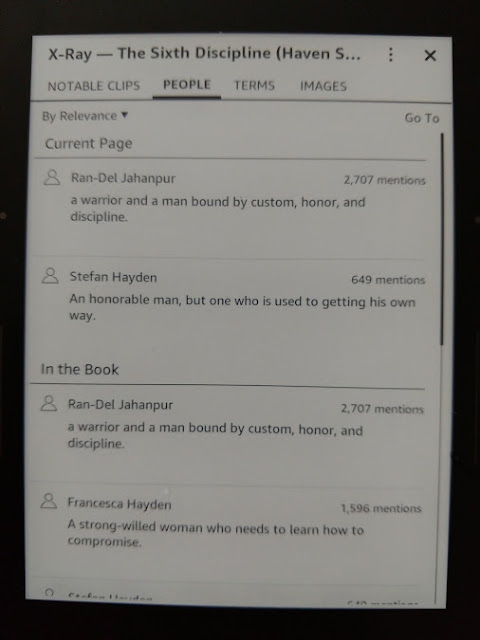 You can see from the menus that you can get a list of characters or terms on the page, with references to where they appear in the text (clips). I couldn't find a way to use this part of X-Ray from Kindle for Android, but I don't know if that's because it isn't there or I couldn't figure it out

For any other authors out there thinking of using the new tool, I will say that you should always go back into the tool after you publish your changes, because either it is easy to miss something, or sometimes the changes I had marked did not actually get published. Also, the sorting features are very helpful in looking for variations of names and terms.

So now, anyone who looks at my book descriptions in the Kindle store will see X-Ray enabled!  Here's Saronna's Gift, to illustrate: 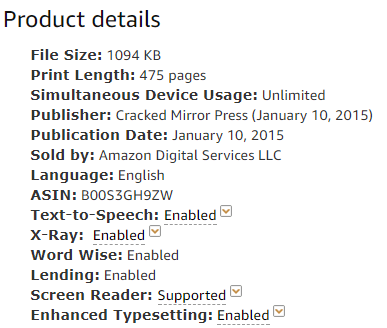 Any authors who want more info on how to do this, or readers who want to know how to use it, feel free to comment!

I'm really looking forward to launching Alien Bonds with this feature enabled from the get-go!


Posted by Carmen Webster Buxton at 3:07 PM No comments: