Reading aloud — Is Alexa a better reader than the Kindle?

I love my new Kindle Voyage! It's very like the Paperwhite, except screen resolution is a tad better, and it has two spots in the bezel that you can depress to page forward and page backward, if you prefer that to swiping or tapping the screen (actually four spots, two each on the left and right sides, so it works whether you're left or right-handed).  But like the Paperwhite and unlike earlier Kindles, one limitation of the Voyage is that it cannot read aloud to you. I blogged about this when I was thinking about getting a Paperwhite, because I liked to use the read aloud feature for proofing manuscripts.

I assumed that Amazon killed this feature in the newer Kindles because their data showed that not many people were using it. Certainly, other e-ink readers never bothered with it.  Now, however, Amazon had enhanced their voice-activated personal assistant Echo, so that it can read your Kindle books to you.


If Alexa (the voice of the Echo) has the same limitations as the Kindle robot voice, this feature may not be that big a deal. The Kindle voice was not great at pausing in certain situations, like between paragraphs of dialog if the first one ended with a question mark. Also there was the problem of homographs. The robot voice could not tell from the context whether the word "bow" was pronounced with a long o, as in "bow and arrow," or a short o as in "take a bow."

Possibly, newer, more sophisticated programming has improved both pacing and assessing meaning from context. Or possibly not, depending on how much research and effort Amazon put into this. The reviews I have seen don't mention either problem, so it's possible it's much better. I don't know anyone who has an Echo, but if you do, please post a comment with any insight you might have.
Posted by Carmen Webster Buxton at 3:39 PM No comments:

A mystery about a mystery: How can two books have the same set of reviews?

I am quite fond of murder mysteries, especially British ones. One of my favorite authors is Dorothy L. Sayers, author of a series featuring Lord Peter Wimsey, the younger son of a duke, and an amateur detective. I've read all of them, some of them many times,  When we renovated our house, I donated 18 cartons of books, including all my Sayers copies to the local thrift shop. However, when Open Road Media started reissuing them as ebooks, I bought some of them, so I could reread them when I felt like it. I loved what a fantastic job OR did on them. I even wrote a post about it. 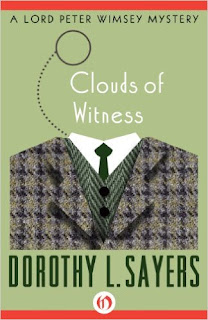 Now, however, someone else is publishing Dorthy L Sayers (presumably, it's out of copyright) and they are no Open Road. You can tell it's a different version because it not only has a different cover, it has a different ASIN (Amazon's unique stock number). The Open Road cover is shown above.

I got an email promotion for Clouds of Witness for only 99¢ (ASIN = B00LDSUTMC). There was no warning on the Amazon page saying "You bought this book on [date]" so I didn't realize I already had the Open Road version (ASIN = B008JVJKXK). I bought the 99¢ version and it was terrible. I have never seen an ebook with so damn many errors!  Most obviously, there were 25 instances of [garbled] and 26 of [missing] they had not bothered to clean up.

“[Garbled] least--not [garbled] see him. But there was poor Denis's body,

“My lords, it is your happy privilege [missing] his grace the Duke of Denver these [missing] of his exalted rank. When the clerk [missing] address to you severally the solemn [missing] find Gerald, Duke of Denver, [missing] guilty or not guilty of the dreadful [missing] every one of you may, with a confidence [missing] any shadow of doubt, lay his hand and say, 'Not guilty, upon my honour.'“

There were also plenty of plain old typos:

“What did you say you found on that skin Bunter?” (this should say "skirt," not skin)
. . .and bunked Silly-ass thing to do . . . * (missing the period at the end of the sentence)
“The position of the fingers being towards the house appears, does it not, to negative the suggestion of dragging?” (should be "negate")

But because it turns out Amazon lumps the various editions together, there is one set of reviews. You see the same reviews for the Open Road version, the crappy, cheapo version, and the print version. People are giving the book one star because this version looks so bad!

I didn't write a review, but I did email Amazon and ask for my money back. It had been more than the 7-day limit, but they credited me anyway. I wish they would make the seller take down the new version.  Formatting that could make me feel cheated after paying 99¢ is truly terrible formatting.

Posted by Carmen Webster Buxton at 1:45 PM No comments: