The Science Fiction Romance Brigade Facebook fanpage has a recurring feature called Snippets where members post a brief excerpt from a book. Below is an excerpt from Alien Vows.

To set the scene, Yulayan is a hybrid being. Her mother is human (Terran) and her father is Wakanrean. Wkanreans mate for life purely from biology. This has had a profound impact on their cultures, as sex is not seen as a matter or morality or even choice.. Yulayan has grown up on Wakanreo but has recently met a young Terran physicist named Kamuhi and has invited him to her family home for a two-day holiday. Everyone there is Wakanrean except for one other Terran guest named Shandrika. Kamuhi has just asked for a tour of the house. 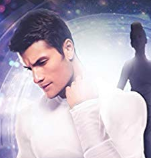 “Be sure to show him your room,” Juoam said. “We’re putting the two of you in there since the guest rooms are all full, and Hushi and his friend have your parents’ room.”
“All right.” Yulayan turned to go and was surprised to see a look of astonishment cross Shandrika’s face. It was gone in a flash, but Yulayan was quite sure it had been there. She shot a quick glance at Kamuhi and noted that he, too, looked almost taken aback.
She pondered this circumstance as she led the way through the main room and into the corridor to her parents’ wing. Kamuhi said nothing at all until he stepped through the doorway into the rehearsal room.
“Neat,” he said, looking around at the oddly-textured walls. The whole room was built to balance sound. Even though there was very little furniture, there was no echo when he spoke. In the middle of the room, a gleaming sphere hung suspended almost two meters in the air. “What’s that for?”
“It’s to provide a focus for my father’s mediation,” Yulayan said, with barely a glance at the sphere. “He mediates before every performance.”
“Interesting.”
“Why did that woman look so strange when Juoam mentioned we were staying in my room?” Yulayan said, coming straight to the point.
Kamuhi spoke matter-of-factly, but Yulayan could tell he wasn’t entirely at ease. “I expect she thought we’re sleeping together.”
“We are. There’s only one bed.”
“I don’t mean literally sleeping. Terrans sometimes use that phrase to mean . . . something more intimate.”
Yulayan was astounded. “You mean she thought we were going to have sex?”
A smile tugged at the corners of Kamuhi’s mouth, but he didn’t let it get out of hand. “I’m sure the thought crossed her mind.”
“How about your mind?”
“Not for an instant,” he said promptly.
“You looked very surprised,” Yulayan said, not convinced.
“I was very surprised. But not because I thought sex was in the picture. It’s just that Terrans don’t usually share a bed with a member of the opposite sex unless they’re very young or they’re lovers.”
“When you say lovers, you mean people who have sex together?”
“Yes.” The smile tugged at his mouth again, and won the fight this time.
“So Terrans only have sex when they’re in love?”
“No.” He shook his head. “It’s something of a euphemism to call having sex making love.”
“Hmmm. It seems very restrictive to me to say people of the opposite sex can’t share a bed unless they’re currently having sex, also. What do you do at holidays and festivals?”
“We don’t have that many times when extended families stay together. Usually, if you have out-of-town company, they go to a hotel.”
Yulayan was shocked. “Even if there’s room for them at your house?”
“Well, where I came from, there’s not often room. Terra is very crowded, you know, and housing is limited. Even with emigration, the Terran population is still in the billions.”
“Good heavens. Why do you have so many people?”
Kamuhi was examining the sound equipment on one wall. “What? Oh, I guess the answer is that Terrans are based on a different evolutionary model. Our species favored excessive fertility to ensure continuation of an individual’s genetic line, instead of ironclad monogamy to be sure all or most of the offspring survived.”
Yulayan frowned. “Sometimes you talk like a professor giving a lecture.”
He grinned, not exactly apologetic, but at least with some level of contrition. “I know, and I’m sorry. Can we see the next room?”