This one is for other authors, as it's about giving away books. Why would anyone give away their books? Well, if you write in a series, giving away the first book can yield good sales on the sequels.

I recently made ALIEN BONDS, the first book in the Wakanreao trilogy, free for several days.The free period started on last Thursday, and I paid for a book slot in two mailing services that are free to readers and offer free or cheap ebooks: Book Gorilla and Ereader News Today. The entry for ALIEN BONDS ran in BG on the Friday, and in ENT on the Saturday. Both promotions did reasonably well., with almost identical numbers.


All together I gave away 1,353 Kindle copies of ALIEN BONDS in the 5 days it was free. The first day, before the promo ran, I tweeted and posted in FB about it. That yielded 21 copies given away. The next day the BG promo ran and I gave away 574 copies. Then on Saturday the ENT promo ran and yielded 578 copies. Some of that total could be from the influence of the earlier promo, because on Saturday with no promo I gave away 125 copies.

By Friday evening, ALIEN BONDS had risen through the rankings to this.

And on Saturday it reached this:

So, being #2 in Kindle science fiction romances probably helped the giveaway, too. There were 55 copies given away on Monday, the last day it was free, and  also 4 copies on Tuesday that snuck in because any Amazon promotion to make the book free ends on Pacific Standard time so there were a few hours that it was still free in some places.

It was also interesting to see where the copies were going.  Here's the country list: 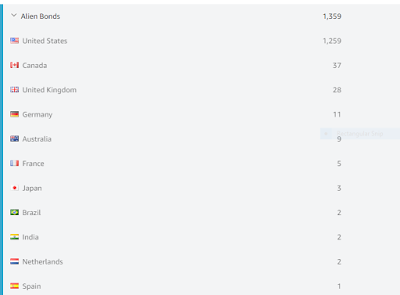 Pretty  much as expected. Only Canada, the UK and Germany made double digits. It was interesting that Germany beat out English-speaking Australia.

Now, of course, I have to wait and see how it goes for sales of ALIEN VOWS and ALIEN SKIES, books 2 and 3 of my Wakanreao series.

Posted by Carmen Webster Buxton at 7:42 AM

Email ThisBlogThis!Share to TwitterShare to FacebookShare to Pinterest
Labels: promotions