Lots of irons in the fire: THREE upcoming releases!

Somehow I now have a total of three novels in various stages of production. They started as two books, but one was so long, I had to split it into two books.

My science fiction romance Worlds Apart will come out in the spring from Crimson Fox Publishing. The book is finished but has not been edited, and it does not yet have a release date. My editor will start work in January and the cover artist in February. It's a longish book, but it does fit as one volume. It takes place on two very different colony worlds (hence the title), one where the hero is born and raised, and one very different world where the heroine has lived most of her adult life.

The Nameless World, however, was slightly more than twice as long as Worlds Apart, and I ended up creating two books from it: The North Edge of Nowhere and Oaths and Promises. The two-book series is far future science fiction, and is set in my ThreeCon universe. It will come out from my own Cracked Mirror Press. The two books are a little different in terms of subgenre, or at least in terms of categorization of the plot. The first one is pretty much a coming of age novel, as Darius, the protagonist, is seventeen when it starts and twenty when it ends. It does have a love story in it, but it occurs between two secondary characters. The second book picks up only a few months after the first one ends. A lot happens in book 2, but a good part of the story line could be called a romance, as Darius is old enough to be involved romantically and that relationship is complicated. This dichotomy might turn out to be a real marketing challenge but I am hoping readers will find The Nameless World Saga compelling enough not to worry about subgenre categorization.

While you could read Oaths and Promises without reading The North Edge of Nowhere first, the story makes more sense when read in order. It's a lot like The Lord of the Rings, which is really one story published in three volumes.

Worlds Apart has no cover, as yet, so I can't show anything for that book, but for a teaser here is the initial cover art for book 1 of The Nameless World Saga: The North Edge of Nowhere. 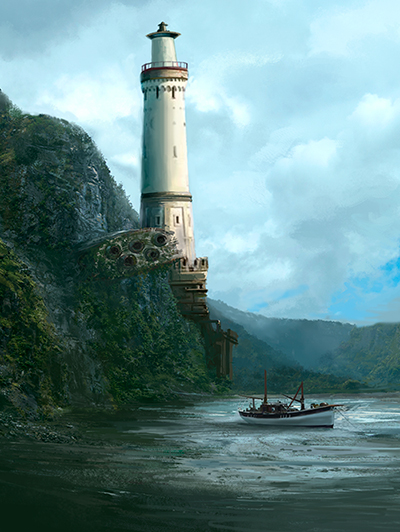 Hopefully this gives you a clue as to the genre and style of the story. It's set on a colony world that has not been rediscovered— not officially rediscovered—  by ThreeCon. If you have any comment to make on the cover art, please do so here!

This book is likely to see publication well before Worlds Apart, but I don't plan to release it until Oaths and Promises is ready, too, because I don't think it's fair to make readers wait for the conclusion of the story.

Posted by Carmen Webster Buxton at 11:38 AM