East met West a long time ago, and in King of Trees, too

A lengthy article by blogger and historical novelist Ben Thomas about some ancient Chinese skeletons (or do I means skeletons of ancient Chinese people?) found at a site dating back to Roman Britain is interesting, because no one knew the Chinese had gotten that far west. It's especially interesting to me, as my newest book to launch in print, King of Trees, is set in an alternate universe and includes an alternate Britain, where Boudicca won and drove the Romans out of Britain. The story includes the arrival of an invasion fleet from an alternate Chinese empire. 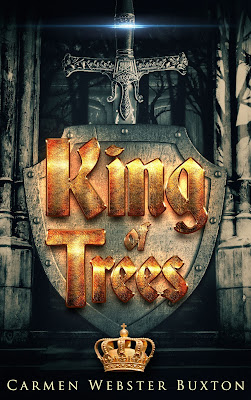 The point of the article is that Asia in general and China in particular were, in many ways, more advanced than Rome. Thomas lists some of the empires that covered parts of the Middle East, India, and China, and articulates something I have observed myself. The ancient Chinese concept that heaven ordains who will be emperor was actually very pragmatic. When the divine emperor was overthrown, it didn't mean there were no gods. It simply meant heaven had willed the change. Life could go on and everyone could shift their allegiance to the new emperor with no problems.

My Chinese empire not only invented gunpowder, they made guns; this article doesn't mention weapons much, but the ancient Chinese in our world also invented gunpowder but didn't use it for much except fireworks and primitive rockets and grenades.

But meanwhile, King of Trees is now available as a paperback on Amazon and on Barnes and Noble with its brand new cover!
Posted by Carmen Webster Buxton at 1:54 PM