A snippet from HIDDEN MAGIC

Snippet from the middle of Chapter One

Background: Garrick Willyun is the Lord of Cold Spring and is waging a war to unite all the manors of the valley of the River Wystan under his leadership because he is convinced the neighboring city-states intend to invade the valley. He recently defeated Richart Tallengen, the very young Lord of Esterby, in battle, and he holds him and some of his men prisoner at Cold Spring Castle. Richart's older sister Maura has come to Cold Spring to see her brother. The snippet begins a few hours after her arrival.. 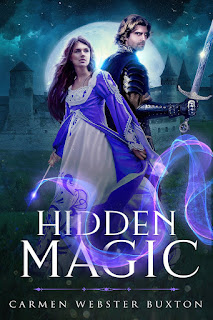 GARRICK flinched as he buttoned his newest shirt. The stiff collar pinched. There came a knock at the door. “Come.”

The door opened to admit Osmund Radulf. The steward bowed. “You asked me to report to you, my lord, after the young lady had seen the prisoners.”

Garrick sat down to pull on his boots. “Yes, yes. Come tell me how it went.”

“She was happy to see them all, my lord,” Osmund said, coming farther into the room. “There was one young man in particular—I believe he was the son of the older woman who accompanied her—that she embraced very heartily.”

The thought that the woman of his choice might already have made a choice of her own annoyed Garrick considerably. “How old is he?”

Osmund coughed discretely. “I should say that he was about your own age, my lord—a very striking man, with black hair and blue eyes.”

Garrick couldn’t hold back a frown as annoyance grew to anger. If she were truly attached to this man, it could be an obstacle.

“If I heard correctly, my lord, the man asked his mother to convey his regards to his wife and children.”

Relief set in. “And there was no other she favored?”

Osmund held out his hands expressively. “Not that I could observe, my lord. She was concerned with each of them—she made note of messages for wives and parents and other loved ones—but she herself didn’t seem unduly attached to any of them.”

His way stood clear, then. “Excellent! And she’ll be at the supper table?”

“Yes, my lord.” Osmund flinched just slightly. “Provided you don’t object to the presence of her companion. She was quite firm that she would go nowhere without the other woman.”

Garrick reached for his waistcoat. “I have no objection.”

Osmund’s shoulders sagged with relief at this acquiescence. He bowed again and left Garrick to finish dressing.

A few minutes later, after one last glance at his own reflection, Garrick left his room. He met his mother on the stairs and offered his arm.

She cast a skeptical eye over him as she took it. “Why are you taking all this trouble for a captive lord’s sister? Are you hoping to use her to win her brother over?”

Garrick smiled and cast a glance over his shoulder to be sure no one was in earshot. “Not at all. In fact, I mean to marry Maura Tallengen.”

His mother’s arm went rigid under his hand. “What?”

“I mean to marry her.” Garrick patted her arm. “It’s time I found a wife, and she has everything I need in a consort—brains, strength of will, and courage.”

Lady Quilla blinked and shook her head. He had never seen her so stunned, not even when his father died. One hand went to her mouth as she struggled to compose herself. “You’d do better to find someone else. You have too much of a handicap with this woman.”
“Perhaps,” Garrick said as they descended the stairs. “But I don’t think so. Once she understands my goals, she’ll come around.”
“You’re assuming,” Lady Quilla said, her dry tone sounding more like herself, “that she’d be willing to devote her life to the same cause you espouse. You’re not offering her employment, you’re proposing marriage.”
“That’s why I don’t intend to say anything to her yet.”
His mother’s eyebrows lifted in a skeptical frown. “And how will you court a woman who lives almost at the other end of the valley? Even in high summer you can’t get to Esterby in less than a day of hard riding.”
Garrick had already thought this out. “I’ll have to be certain I make a good impression on her before she leaves here. And I’ll have to win over her brother. Once he’s my liegeman, it should be easier to control the logistics of the situation.”
She gave him an appraising look. “Are you quite certain, Garrick, that it’s her brains you admire so much?”
Garrick laughed as they went down the last steps. “Now, Mother, you taught me yourself that the best goals are those that satisfy more than one ambition.”
Hidden Magic on Amazon
Posted by Carmen Webster Buxton at 4:23 PM