THE NAMELESS WORLD has launched! 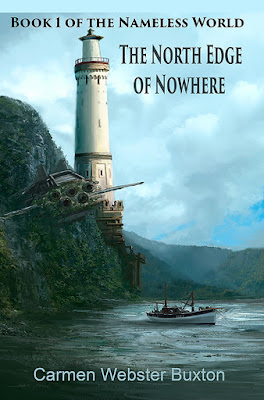 My two-book story THE NAMELESS WORLD has launched! As of yesterday, both books were available in the Kindle story, and the first book, The North Edge of Nowhere, was also available n hardcover. The paperback covers for both books and the hardcover for books, Oaths and Promises, are still being tweaked bur they should follow soon.

This duology is difficult to categorize as it has elements of several genres. It's set in the far future on a colony world unknown to the rest of the galaxy, so it's definitely science fiction. Darius, the protagonist is 17 at the start of Book 1, so you could also call it YA, but the story progresses and by Book 2 Darius is 20, so you could also call it a coming of age story. And while the romance in Book 1 is confined to two important secondary characters, Daniel the Wanderer and Ramons, a physician, in the second book, Darius himself finds love, so you could also label this a romance.

In the excerpt from book 1, below, we see a scene between Daniel and Ramons. Both of them are outsiders to the culture in which they live, Daniel even more so than Ramona. And both of them have a secret. Daniel thinks he has guessed Ramona's secret; Ramona is quite certain she knows his.

Excerpt from Chapter Two of The North Edge of Nowhere:

Grateful for the chance to think things over, Daniel left the main house before Lord Brian could change his mind. He walked outside and looked up at the sky. The early morning sunshine had given way to gray clouds. This would be Daniel’s third autumn at Castle Muir. He no longer found it depressing to spend days without seeing the sun.

Daniel debated. He needed a workout. The martial arts skills he had mastered years before had earned him a place here, and he needed practice to keep those skills sharp.

But still, the events of the morning had disturbed him, and he wanted some advice.

He walked to the square building with barred windows and a single door, euphemistically referred to as the guest barracks, to see if Ramona was still treating the wounded men. Ramona was an outsider here, too, even if not quite so alien as he was, and he usually found her advice helpful. At least, he told himself, needing her advice made a good excuse to see her.

The guard at the guest barracks shook his head in answer to Daniel’s question; Ramona had left a few minutes before. Daniel made his way to the back of the keep and knocked on her door for the second time that day.

When Ramona’s voice called out for him to enter, Daniel went in. A teakettle simmered on the stove next to the pot of boiling broom herb, and the flowery scent of fresh-brewed tea mingled with the woody herbs.

Ramona sat at her kitchen table sipping a cup of tea as if no untoward event had occurred. She offered tea to Daniel, but he declined.

“Did you hear what happened in the great hall after you left?” he asked.

Ramona rolled her eyes. “Who could avoid hearing it? It’s no small matter to Castle Muir that its lord has found an heir.”

The certainty in her voice surprised Daniel and incited that uneasy feeling he had had ever since he had dragged the red-haired boy upstairs. “Is everyone so sure this boy is really Lord Brian’s son?”

But Lady Helaina had had no supporters until after Ulf had cut the boy’s hair. “Surely whether one person looks like another is, to some extent, a matter of opinion.”

She glanced at him over her cup, rather an appraising glance. “There’s the ring. Basco remembers Lord Brian getting whipped for coming back from without it. So did old Berta. Lord Fulke had told her the ring was from the time when we came to this place in silver ships.”

Daniel blinked. No one had ever made any reference to space travel in his hearing. Still concerned with the rightness of his own actions, he let that subject drop. “That proves that Lord Brian gave the ring to the boy’s mother. It doesn’t prove he’s the boy’s father.”

“The boy said the ring was his grandfather’s. His mother must have told him that it was. Besides, he has red hair, just like the old Lord.”

It sounded convincing, but Daniel’s conscience still pricked him. Lord Brian had made a decision from which there was no appeal, and no one else seemed to feel a need to question it. “Lots of people have hair that color.”

Curiosity ripened in Ramona’s expression. “Why should you care?”

Daniel took his time in answering. He had no fear that she would carry tales, but on the other hand, it was difficult to solidify his unease into words. “I held the boy down,” he said at last. “I was doing my job, but I was also helping take this boy away from his mother.”

Ramona stood up and reached for a long-handled spoon to stir her boiling liquid. “You brood about things no one else cares about. If this boy is Lord Brian’s son, then he has a right to him.”

Either on purpose or from inattention, she was missing the point. “But what if he isn’t?”

Busy with her potion, she spoke over her shoulder. “Don’t let it worry you. He is.”

“How can you know for certain?”

She turned her gaze back to him for a second. She glanced at the floor, then shot him a look from under her brows. She hesitated a moment, as if she were debating, and then she put down the spoon. She sat down again, folded her hands around her teacup, and looked straight at Daniel as she spoke in a low clear voice. “The way that you think I know.”

Daniel stood frozen and tried to gather his wits. He had never thought she would speak so plainly. He met her look with his own steady gaze, and they stared at each other for a few moments.

Finally, Ramona took a sip of her tea, staring into the dark surface as if it held the answer to a mystery.

Daniel opted to go for broke. He put both hands on the table and leaned over so that his face was close to hers. “If you know my thoughts, then you know what I’m thinking now.”

Ramona put her cup down. “I know.”

She stood up. Daniel backed up, but she took a step closer to him. She put her arms around his neck and pressed herself against him.

Relief flooded Daniel. He took her in his arms and kissed her hungrily. After a few moments, Ramona pulled away.

“Just a moment.” She stepped to the stove and moved the pot of liquid off the fire, then came back to take his hand. “Not here. Someone might come in.” She pulled him with her through the doorway into the small bed chamber that was the only other room in her house. Before Daniel could say anything, she had shut the door and slid the bolt into its socket.