An interesting point about ebooks is that their use is not governed merely by the technology available but by the marketplace. Sony had a very nice e-ink reader before Amazon came out with the first gen Kindle (which looked a little clunky in comparison), but Sony didn't have much of a bookstore, and its Reader never got much traction in the marketplace. Amazon was the first company to successfully deal with the chicken-egg problem: no one would buy an ereader unless there were lots of ebooks to read, and one one would publish in ebook form unless there were lots of folks with ereaders. Their success gave them a solid head start in the ebook race.

To establish the Kindle as a viable reading platform, Amazon not only created apps for other devices (iPhones, iPads, PCs, Android), they discounted the price of ebooks so that best sellers were rarely more than $9.99. They could do this because publishers sold ebooks at wholesale rates; they set a price, and Amazon paid them that amount. Amazon then turned around and set its own retail price at whatever it wanted, sometimes less than it had paid for the book.

It was the Kindle's success that made the publishers fear it. In case you haven't been following it, there is a case in federal court right now that relates to the struggle for the ebook market. The Department of Justice is suing Apple about possible price fixing and antitrust aspects of its agreements with five of six of the major publishers; those agreements called for agency pricing where the publisher sets the retail price and the retailers gets a set percentage of it when the book is sold. The five publishers, who made Amazon accept agency pricing, too, have all already settled.

Apple has a lot of (very good) lawyers, so I am wondering how this lawsuit will come out. A judge is hearing it, not a jury, so there won't be any kind of deadlock. But I do wonder if Steve Jobs were still alive if they would call him to the witness stand.

The case is awaiting a decision and speculation is rife on the internet.

Posted by Carmen Webster Buxton at 9:44 AM No comments: 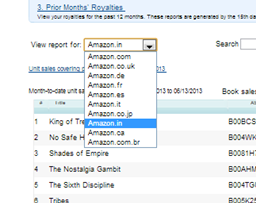 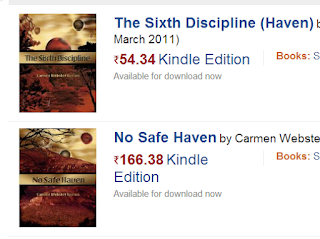 Posted by Carmen Webster Buxton at 8:09 AM No comments:

The one drawback to using Smashwords as a portal to other retailers (iBooks store and the Nook store are my biggest non-Kindle markets, but they also cover Sony and Kobo, and a few others) is that it takes a while to get the sales numbers back. Smashwords just recently updated the May numbers both Apple iBooks and Barnes & Noble Nook sales reports. When it came to giveaways, Nook was a winner, at least for me. I gave away over 4,000 Nook copies of The Sixth Discipline! That doesn't compare to the 15,000 copies I gave away in May on the Kindle, but it's still a lot more books than I ever gave away before on any other non-Kindle platform. Sales figures for No Safe Haven, the sequel to the free book, were pretty good for the Nook, but about 20% higher for Apple. I wish I had some giveaways stats for iBooks, but it seems like Apple no longer bothers to report “sales” for free books, so I don't have much to go on in comparing, but since the Kindle and Nook giveaway-to-sales ratios are very similar, I think I probably gave away about 5,000 iBooks copies. Since I don't know for sure, I will go with Nook as the giveaway winner.

I can't quite believe it, but I just bought another Kindle!  This one is a Kindle Fire. The irony is, I don't really plan to use it as an ereader. I'm a total e-ink fangirl, and I am keeping the Paperwhite. What I really want is a small tablet for travelling.  When I leave the house to do errands, the Paperwhite will still be in my purse. Anytime I find myself with nothing to do, I can whip it out and start reading.

On the other hand, when I travel to Boston in a couple of weeks, I can pack the Kindle Fire in my purse or my carry-on bag, and have it available for reading or for browsing the web if there's wifi. I hate lugging a laptop just to answer email and do a blog post or two, so I will be set with my new Fire HD! The 7" size is perfect for that!

Plus there's a Father's Day promotion going on and you can get $20 off any Kindle Fire using the promo code DADSFIRE. Some of the accessories are on sale, too.  I feel a little guilty getting a Fire for myself with a Father's Day promo, but my husband has a Kindle Touch and an iPad, so I get the Fire!


Posted by Carmen Webster Buxton at 11:21 AM No comments: