What a deal! ALIEN BONDS (Kindle version) now for sale for 99₵ #MFRWhooks

This week I'm participating in the Marketing for Romance Writers' Book Hooks blog (#MFRWhooks) with my novel ALIEN BONDS.  All the books in the project are free or cheap! Check out the list at the bottom of the blog if you're looking for something to read-- besides ALIEN BONDS, I mean! 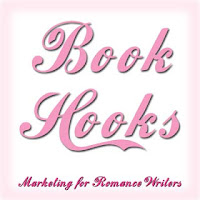 Here's an excerpt from the beginning of the story, where prim human Dina Bellaire from the colony world Fantar meets Kuaron Du, a Wakanrean, for the first time-- right after she ditches the blind date a friend set her up with: 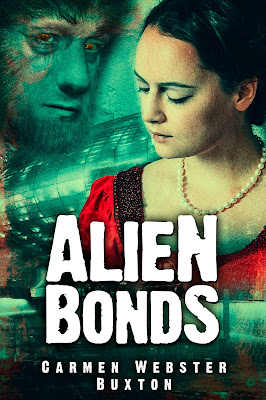 You can buy the Kindle book here; it's temporarily on sale for 99₵ and it's always free in Kindle Unlimited, along with books 2 and 4 in the trilogy. All three books are also available in paperback.
Posted by Carmen Webster Buxton at 11:19 PM 8 comments:

My review of the Kindle Oasis

Santa,  in the form of my husband,  was good to me this year. I got the new Kindle Oasis for Christmas!

I love this Kindle!  The screen is slightly bigger,  which is nice, especially if you like to read with a larger font. Also, the design accommodates one-handed reading much better than previous Kindles. One side is wider than the other,  and has actual page turn buttons, not like the recessed page turn spots on my Kindle Voyage.  If you're left-handed, you simply flip it over and the buttons are in the left. Mind you it still has a touch screen if you prefer swiping pages to pushing buttons.

It also has Bluetooth, but I haven't used it yet. 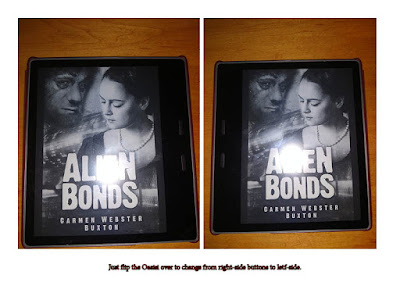 Other advantages are that the Oasis is waterproof and it has a warmer light, although I find that a pretty subtle difference.Like the Voyage and the paperwhite, if you buy the cover for it, the Oasis "wakes up" when you open the over. It appears to use exactly the same charging connection as earlier Kindles.

The on-off switch is on on the top edge (assuming right handed buttons). Bt you won't need to use it much unless you're reading without the cover on. 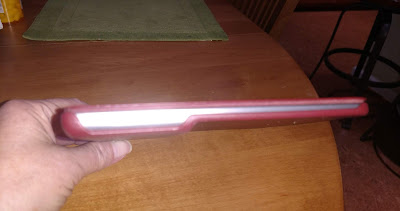 You can't see the button in this view because the camera's light reflected off the metal but it's there. With the cover on and no buttons visible, it's easier to see how close to a square the Oasis is. 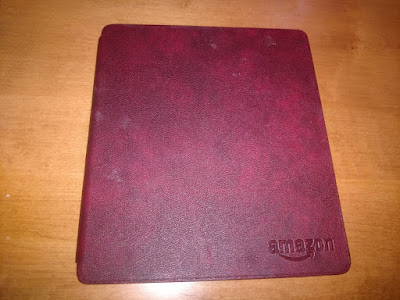 All in all, I love my new Kindle! Whether it's enough better than a Paperwhite or the (no longer for sale new, except possibly from 3rd party sellers on Amazon) Voyage to justify the price increase, I can't say, but I'm not giving it back! As usual, I got the 3G connectivity as well as WiFi. All my Kindles have worked great on my home WiFi but there were a few times I could not use hotel Wifi so I always get the 3G. If you're holding a Kindle in your hand and wanting a book, it's a terrible feeling NOT to to be able to get it..

A new guest blog post, all about ALIEN BONDS!

I have a  guest blog post up on Kayelle Allen's Romance Lives Forever (FRL) blog. The post is about the first book in the Wakanreo trilogy, Alien Bonds and what how I wrote it. Check it out! 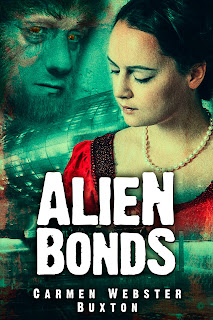 Posted by Carmen Webster Buxton at 10:02 AM No comments:

There is currently a  romance online book fair (all sub genres like science fiction romance are included) where every title is 99₵. I have one titles participating, my fantasy novella WHERE MAGIC RULES. Tthe first novel in my Wakanro science fiction romance trilogy ALIEN BONDS is also 99₵ temporarily but it did not make it to the fair in time,  The link for the fair is here. 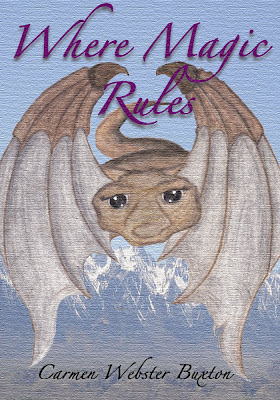 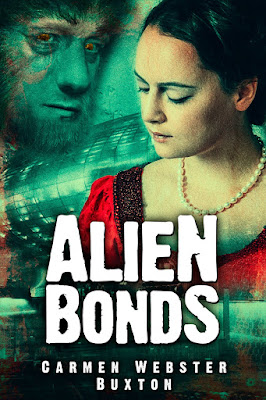 As of today.Saronna's Gift is available for free in Kjndle Unlimited. The KU program has been very good to my science fiction romance titles, so I decided to move SG to it. 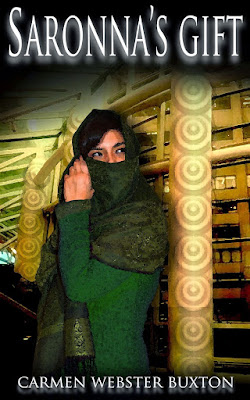 The story is both a voyage of self discovery and a love story, so I think it will do okay in  KU. Other categories don't seem to do as well as romance, at least not for my books.

Posted by Carmen Webster Buxton at 9:52 AM No comments: