As of now, Saronna's Gift is no longer exclusively a Kindle ebook.  I loaded an epub version to the Nook Press platform and successfully published it to the Nook store. I had held off on leaving KDP Select for one additional 90-day cycle because the book was doing well with Kindle Unlimited (KU) borrows, but that was tapering off, and so I went ahead and launched it on B&N.

I plan to also load the book to Smashwords soon, so that I can make it available on iBooks and Kobo, and other vendors.  One reason I started with the Nook platform is that the print version is already available on Barnes & Noble, so with Amazon, this will make two retail stores that offer the book in both ebook and hard copy formats. 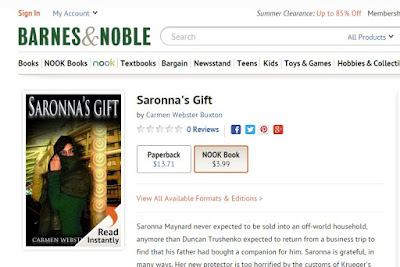 And there's one nice thing about KDP; Amazon is still reporting on (and thus presumably paying me for) pages of Saronna's Gift read by users who borrowed it while it was in KU. I'll be curious how long it takes for that to stop completely. I expect people borrow books but don't read them right away, so it might be weeks or even a month or two.

Posted by Carmen Webster Buxton at 12:57 PM No comments: 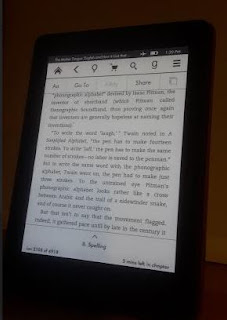