My review of the Kindle Paperwhite

I've had the Paperwhite for several days now. I got the 3G model, but of course the first thing I did was connect to my home network. It was pretty easy to set it up, and the bunch of books I had already sent to the Paperwhite downloaded quickly.  I've read on it for a fair bit now, and I'm ready to say what I like and what I don't.


All in all, I love my new Paperwhite. I have had the original Kindle, the Kindle 2, the Kindle 3 (now known as the Kindle Keyboard), and the Kindle Touch. Each new device has offered improvements, but this is the first time when it has felt like there really is not that much to improve, at least in the hardware (except for TTS).

If I were posting this on Amazon, I would have to give it five out of five stars.

* KSO is Kindle with special offers, a cheaper version that shows ads as screen savers and on the home screen.


Posted by Carmen Webster Buxton at 8:43 PM No comments:

I finished the copy edits on The Nostalgia Gambit!

I finished editing The Nostalgia Gambit, based on the marked-up copy provided by my copyeditor. I'm pretty happy with the way it came out. I have the cover, and I have the ISBNs. Now, as soon as the proof reader is done, the book can go off to the conversion house.

And then, of course, I'll have to proof again on the Kindle (my new Paperwhite arrived!) and make any last minute fixes. Once I have a corrected mobi/prc file, I will load it to KDP Select. I don't plan to leave the book in KDP more than one 90-day cycle, but I will use the free days promo feature of KDP Select to get a head start on selling.

In three months when the KDP Select period is over, it will be the middle of February or so, and I am hoping by then Smashwords will finally be able to accept epub files! That will make offering the book in other stores not only simpler, but also mean the version pushed out from Smashwords to other retailers will look much better.

Posted by Carmen Webster Buxton at 11:47 PM No comments:

Email ThisBlogThis!Share to TwitterShare to FacebookShare to Pinterest
Labels: my books, self-publishing, The Nostalgia Gambit

This article in The Guardian about the last episode of Dr. Who is a good example of why I don't write time travel stories. If you have not seen this episode and plan to watch it, stop reading now, because major spoilers are involved! Ditto for reading the article, by the way.

Okay, for those not worried about spoilers, companions Rory and Amy Pond end up in the recent past, in New York City where the Weeping Angels are causing havoc in the space time continuum to such as extent that the Doctor declares he can never go back there to that time again. When Rory and Amy get sucked back to NYC's past at the end, they become stranded. The Doctor flies off in the Tardis without them. What the Guardian article shows is an alternate ending where Brian, Rory's wonderful father, meets his grandson, who shows up on his doorstep (actually Rory and Amy's doorstep) as a grown man and hands Brian a letter explaining that Rory and Amy were trapped in the past and could never get back, but they wanted him to know they had a good life and by the way, shake hands with your grandson.

The article wonders why the ending wasn't filmed, as it would have provided some wonderful moments for the actor who plays Brian, and also some closure on the Ponds as companions. I think that's one reason why it wasn't filmed!  Time travel stories don't have closure because the writers always want to leave a loophole to change things. Suppose Rory and Amy move to London and wait a few years.  Could the Doctor come back for them then? What if more angels were to show up and suck them farther back in time?  Could the Doctor rescue them then? Without closure, the dramatic present is still wide open, and I think the writers prefer it that way.

But not me. That kind of plot loophole just makes my brain hurt.

Posted by Carmen Webster Buxton at 12:12 PM No comments:

Email ThisBlogThis!Share to TwitterShare to FacebookShare to Pinterest
Labels: Dr. Who, time travel

Did Smashwords update all the big retailers at once?

I haven't been checking sales reports on Smashwords lately, so I don't know if they did them all on one day or three days in a row, but there are now new sales reported for Sony, Apple iBooks, and Barnes & Noble. I did best on iBooks as usual, with Barnes & Noble next and Sony last.

As on Amazon. No Safe Haven is selling the best, but Shades of Empire isn't that far behind it. Also, I have more sales in the US than anywhere else. I wish I knew how The Sixth Discipline (free book!) was doing on all those platforms but B&N is the only one that lists numbers for free books (except maybe Sony, and I haven't got a free book with them yet).

Posted by Carmen Webster Buxton at 4:14 PM No comments:

Email ThisBlogThis!Share to TwitterShare to FacebookShare to Pinterest
Labels: Amazon, No Safe Haven, Shades of Empire, Smashwords, The Sixth Discipline

Amazon to me: We've got good news and bad news

Last week Amazon sent me an email that my Kindle Paperwhite would be a week late. Today they sent me an email that they would issue me a $10 credit on my Amazon account to make up for the inconvenience. Considering they're selling the thing on a very slender (or possibly even nonexistent) profit margin, I call that pretty nice.

I don't say I wouldn't rather have the Paperwhite on time, but if I can't have that then I'll take it late with a consolation prize.

Posted by Carmen Webster Buxton at 8:18 PM No comments:

Shades of Empire is finally in the Sony Reader store!

At last! The Sixth Discipline still might not be free, but at least Shades of Empire is finally for sale in the Sony Reader store!

Sony is the last holdout. Every other retailer (or e-tailer as some like to say) has The Sixth Discipline free except for Sony. The interesting thing is that it's not consistent. Sony had Where Magic Rules up ages ago, but Shades took much longer.

Oh, well! At least there is hope.

Posted by Carmen Webster Buxton at 8:39 PM No comments:

Email ThisBlogThis!Share to TwitterShare to FacebookShare to Pinterest
Labels: Shades of Empire, Sony ebooks, The Sixth Discipline, Where Magic Rules

Today's Goodle doodle is a clever  fun tribute to Little Nemo in Slumberland, a comic strip by Winsor McKay. The doodle is very clever and starts with a frame that includes a sort of bell pull in the lower right corner, that the viewer can click to start the next sequence of events in the story. 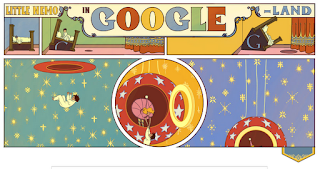 Posted by Carmen Webster Buxton at 10:42 AM No comments:

Email ThisBlogThis!Share to TwitterShare to FacebookShare to Pinterest
Labels: comics

I have a post on The Serious Reader blog today! It's all about what causes the many errors we (sadly) still find in ebooks. The site also has lots of reviews as well as my post. Check it out!

Posted by Carmen Webster Buxton at 8:23 AM No comments:

The Nostalgia Gambit is back from the copyeditor's!

I just got the marked up manuscript for The Nostalgia Gambit back from my copyeditor. Now I have to go through the pages and either make the changes or (in some cases) argue about them.

After that. it will be one final proofing on my Kindle, and then off to the conversion house!
Posted by Carmen Webster Buxton at 1:36 PM No comments:

Email ThisBlogThis!Share to TwitterShare to FacebookShare to Pinterest
Labels: my books, The Nostalgia Gambit 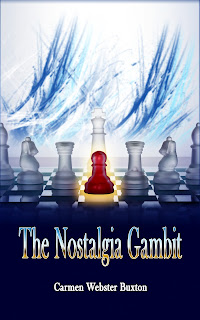 If anyone out there feels like leaving a comment, tell me what you think this book is about, based on this cover. Feel free to be as vague or as specific as you like!  I'd be really curious to see if this cover conveys the concept of the story as well as I think it does.  In fact, if there's more than one guess, I'll give the person who is closest a free copy of the ebook when it's ready.

Posted by Carmen Webster Buxton at 7:44 PM No comments:

Email ThisBlogThis!Share to TwitterShare to FacebookShare to Pinterest
Labels: book covers, my books, The Nostalgia Gambit

Get your free short story here!

I added a page to the blog called Free Story! And if you click on that page, it will (no surprise ) tell you how to get a free story.  This particular story is a fantasy I wrote, a sort of riff on Sleeping Beauty but instead of sleeping, my beauty is weaving— on a loom, not weaving through traffic or falling down drunk or anything like that.

This is an actual short story, not a novella like Where Magic Rules, so instead of selling it, I'm offering to send the story for free to anyone who asks for it.

Posted by Carmen Webster Buxton at 6:41 PM No comments: