Update on my books

So, here is where we are in Buxton World:

King of Trees is now on iBooks as well as Kindle and Nook.

The Nostalgia Gambit is still not on iBooks! I don't know why, since KoT made it onto that platform in days, but TNG is still not there after two months.

The Sixth Discipline had a fantastic month! Thanks to the Bookbub promotion, it has already topped 15,000 (free) copies in May, and that's on Kindle alone. It's also now free in the UK and Canadian Kindle stores.  The sequel No Safe Haven is selling well in consequence.

Lastly, my science fiction romance (working title is now Saronna's Gift) is back from being critiqued by my writers group, and is now undergoing some revisions.  I'm still aiming for a late summer release.

Posted by Carmen Webster Buxton at 1:46 PM No comments:

Email ThisBlogThis!Share to TwitterShare to FacebookShare to Pinterest
Labels: King of Trees, No Safe Haven, The Nostalgia Gambit, The Sixth Discipline

King of Trees is available in more stores

I recently uploaded King of Trees to the Barnes & Noble Nook store, using their new Nook Press feature, which replaces Pub-It!, the original iteration of self-publishing on the Nook.  It took about two days, but I'm hapy to report that it's now for sale on the Nook as well as in iBooks.

Oddly, The Nostlgia Gambit is still not in iBooks, even though it made it to the Nook and everywhere else!  The folks at Apple must not like nostlgia!

Email ThisBlogThis!Share to TwitterShare to FacebookShare to Pinterest
Labels: King of Trees

The Sixth Discipline is now free in the UK Kindle store!

It seems like Amazon is on a mission! They have made The Sixth Discipline free in the UK Kindle store. That means it's now free in the US, UK, and Canadian Kindle stores, as well as most other retailers.

Posted by Carmen Webster Buxton at 8:46 AM No comments:

The Sixth Discipline just got X-Rayed!

The X-Ray feature on Kindle is really handy for epic books with a large cast of characters or those stories that span years, where a character can disappear for pages and pages and then pop back in again. X-Ray give you a idea how important the character is, and who they are, but it only works if the publisher has gone the extra step and provided Amazon with a file to use to generate the X-Ray.

In addition to the newly-purchased Goodreads, Amazon also owns social reader site Shelfari, and one of the things this means is that on Shelfari, the author or any reader can create lists of characters and places in the book. Those lists are then available to view on the bottom of the product page on Amazon.

It looks like Amazon might be planning to spin this function off into creating X-Ray files for KDP books, because my book just got a whole bunch of characters added by someone known as "X-Ray," who has also added characters to a boatload of books!

It would be cool if it's true!

Update:  I just downloaded this book again and it now has the X-Ray feature!  Yay!

Posted by Carmen Webster Buxton at 2:06 PM No comments:

The Sixth Discipline is free in Canada!

Good news, eh? The Sixth Discipline has been free in in the US Kindle store since August (due to price matching) but now Amazon has made it free in Canada!

Yay for price matching! I wish I knew what caused this? I've only given away a few copies but it' already moving up in the rankings!

Posted by Carmen Webster Buxton at 9:14 AM No comments:

Email ThisBlogThis!Share to TwitterShare to FacebookShare to Pinterest
Labels: promotions, The Sixth Discipline

Today (May 10) is the last day that King of Trees will be in the KDP Select Program, which means it's also the last day it will be in the Kindle Owners Lending Library (KOLL). In additon to books published via KDP Select, there are a lot of tradionally published books in the KOLL, too.  Amazon negotiated with some publishers and pays a fee every time somone borrows a book. The Harry Potter books are the most famous example.

If you own a Kindle or a Kindle Fire and you have Amazon Prime, you can borrow one book a month for free from the KOLL.  The trick is, you have to borrow the book from your Kindle or Kindle Fire.  You can't do it fom the web.

But, since King of Trees is no longer going to be in KDP Select, that means I can load it to other vendor platforms, which I plan to do ASAP. I'll be sure to post when it hits the major ebookstores.
Posted by Carmen Webster Buxton at 8:07 AM No comments:

Writing to make a connection

When people ask me why I write, I say it's because I was born a storyteller. I have a tin ear and two left feet, so music and dance were out as a way to tell stories. I can draw a little, but not enough to do what I would want to do. Telling stories in person is fun, but finding an audience is hard to do. That leaves writing. Putting a story down on (real or virtual) paper gives me the best opportunity to reach people. I want to make a connection; I want to tell a story and make people care about how it ends; I want to create characters and make them come alive in other people's heads.

Self-publishing is a fantastic breakthrough because in the past, unless an editor thought your story was marketable, it went nowhere. Notice I didn't say “good,” I said “marketable.”  Editors are in the business of buying books from authors that they think readers will buy from them. RandomHouse didn't buy Fifty Shades of Gray from E.L. James because they thought it was great literature; they bought it because they knew people would buy it. Thousands of people were already buying it from online sellers because the author had self-published it. An editor might think a book is beautifully written, but if he doesn't think anyone will buy it, he won't buy it either.

Self-publishing has been around a long time, but in the print world, it costs a lot of money to do. In addition, a self-published print book had no good path to get into bookstores.  There were a few authors who started that way, but not many. eBooks were a game changer not only because they were cheaper to produce, but because because their distribution is online, and not controlled by companies that deal only with publishers.

One nice benefit of technology is that online sites like Goodreads and online retailers like Amazon allow readers to post their thoughts on the books they have read. Admittedly, not all reviews are positive, but still, enough are that I can get a good buzz of connectivity, and know that I suceeeded.  I'll take that deal!


Posted by Carmen Webster Buxton at 2:11 PM No comments:

In my last post I mentioned that The Sixth Discipline had been featured in a BookBub promotion. Well, the heady rush of giving away a thousand books in a little over an hour has calmed down, but the book is still doing well. At its peak, it got up to #15 in free Kindle books, and #1 in free science fiction books.  It has dropped to #37 in free Kindle books, but it's holding on to #3 in free science fiction.

Which goes to show you the size of the digital market! And also the value of promotion. Thanks to giving away the first book free, No Safe Haven, the sequel, is now selling better than it ever has!

Another benefit to BookBub is that it covers all the major ebook platforms, not just the Kindle store. BookBub patrons can select which ebookstores they want to receive notices for. Thus, whether an author has a book free in multiple bookstores, or only in one, he can still reach the right customers with BookBub.

I'm sure happy I signed on.  I just wish Smashwords could get retailer data online faster, so I could see the impact of the promotion in other bookstores besides Kindle.


Posted by Carmen Webster Buxton at 3:21 PM No comments:

BookBub: a great resource for readers of digital books!

BookBub is a new service that lists both free and reduced price ebooks, available on Kindle and other platforms. They charge authors a (very reasonable) fee for the promotion, but readers can get the info for free. BookBub posts to the web, and also to FaceBook, and they even offer free daily email, which you can filter so you only see books in the genres that interest you.

It's a great service! Did I mention that The Sixth Discipline is listed there today?  here's the blurb they wrote for it:


“Ran-Del, a skilled forest warrior, finds his life turned upside down when a mysterious kidnapper takes him to a terrifying city, foiling his every attempt to escape — a gripping, futuristic novel simmering with suspense.”

And it's going like hotcakes, too! #42 in Free Kindle Books and #4 in free science fiction!

King of Trees is free for the last time!

My alternate history/science fiction novel KING OF TREES will be free in the Kindle store TODAY ONLY (May 1)! This is the last time it will be free!

Here are the links: 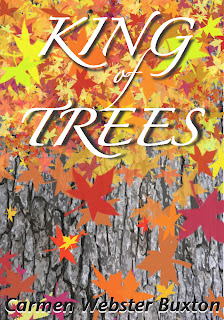 Posted by Carmen Webster Buxton at 8:59 AM No comments: