I was right! There is now a Kindle store for Mexico! 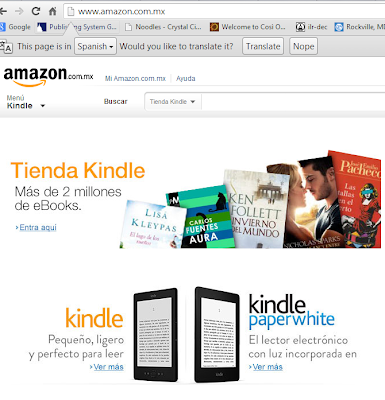 I knew it might be there, because a line for it showed up on my KDP report page again, and when I went to Amazon.com.mx, instead of getting redirected to plain old Amazon.com, I ended up at the page above. 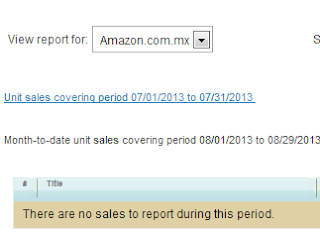 Posted by Carmen Webster Buxton at 2:01 PM No comments:

Redshirts: A Novel with Three Codas by John Scalzi

I am bemused. This book was very different from anything I have ever read. The characters in it don't just “break the fifth wall,” they cut a window, install drapes, and pull up a chair to enjoy the view.

It starts with people on some far-future starship noticing how many of them die on away missions. Eventually they figure out their fate is driven by something outside their universe. WARNING: Spoilers ahead!

These folks discover that for each of them there is a corresponding actor in a TV show, and if the plot calls for that character to die, then the starship crew member dies, too. So many layers of unreality end up layered together, it's like practicing archeology to read the narrative.

After seeing everything from the alternate future universe crew member's point-of-view, we move to our own earth and see things from the TV show scriptwriter's POV, and then from one of the actor's POV. And along the way, every character seems just as real as any other character. It's clever, it's well written, and it's entertaining. I'm just not sure it's actually a novel.

I liked it a lot, but I am bemused.

View all my reviews
Posted by Carmen Webster Buxton at 3:37 PM No comments:

Is Kindle going "South of the Border, Down Mexico Way"?

I am so showing my age by knowing the title of that song!  On the KDP platform, when you check your sales reports they are separated geographically, for the Kindle stores in the US, the UK, Germany, France, Italy, Spain, Japan, India, Canada, and Brazil. When I checked it yesterday, I swear I saw an entry for "amazon.com.mx" which could only be Mexico. Right now there is no Kindle store in Mexico; if you type "amazon.com.mx" into a browser, it redirects you to the regular US-based amazon.com.

This morning the amazon.com.mx line is gone! Missing! I think someone goofed and released something early (or maybe they were testing, and it was deliberate) and this means Amazon will open a Kindle store in Mexico.  I wish I had thought to take a screen shot!

The good thing about self-publishing is you own worldwide rights to your own work, so you can publish worldwide from any platform that supports global sales. Olé!

Posted by Carmen Webster Buxton at 10:37 AM No comments:

In an earlier post about my use of a BookBub promotion  back in May, I mentioned that I was guessing that Apple didn't seem to report how many free books they give away any more, but actually, they do. It's just it takes a lot longer to get free book numbers from Apple than it does sales numbers. Interestingly, since my May and early June sales of No Safe Haven (the sequel to the free book) were higher for iBooks than for B&N, I was assuming that I had given away more free copies of The Sixth Discipline on that platform than on B&N. Not so! I actually gave away noticeably fewer (only a little over 2,500 in iBooks, versus 4,000 on B&N). So what does that mean?

I could hypothesize either that there are more free books on the iBooks platform, which makes it harder for an unknown author to stand out, or that there are simply fewer iBooks customers. But either way, iBooks readers have a higher follow-through on actually reading books they get for free. I know from my own experience and from anecdotal evidence that lots of books downloaded for free are never even opened, let alone read. You'll notice I'm assuming that sales of the sequel will be higher for folks who read the first book!

On the other hand, in July, I had higher sales numbers on Nook than on iBooks, so go figure.
Posted by Carmen Webster Buxton at 11:35 AM No comments:

While the recent flap about JK Rowling writing a non-best-selling mystery as Robert Galbraith proves reviews aren't everything, Amazon reviews really do help! That's why I was happy to see that The Sixth Discipline reached the half-century mark on Amazon.com—50 reviews!

At the same time, I am also looking at its ranking, which has fallen a bit lately, after the huge rise in May.  In Italy though, where the book has just recently become free, it would look like it's doing really well.

That's 762 in all free Kindle books, and 8 in "Fantascienza" Kindle books in English.  I think Fantascienza is Italian for science fiction, except it looks like it could also come from the word for fantasy. Actually, that's probably a pretty good word for my books, as I make no claims that the science in them is plausible. Some folks would call my work science fantasy. I hope bambini e ragazzi doesn't mean Amazon has classified it as a kid's book!

But to return to the number, 762 sounds great, and 8 sounds even better, but remember that the Kindle store in Italy seems to consist almost entirely of books in English. All the top sellers and top free books are in English. And in fact, the number of books I have given away in Italy is still in the single digits, which means there are not a lot of people in Italy downloading free Kindle books!

I guess this means I can get in on the ground floor—or as they would say in Italy, the pianterreno.