Praxiteles Mercouri, known to his friends as Prax, has spent his whole life on the plains of the planet Celadon. He knows nothing of technology; his nomadic people travel in huge wagons pulled by enormous beasts native to Celadon. His culture is based on clans, duty, and obligation.
Rishi Trahn lives on Subidar, a much more populous world with a much higher level of technology. As the sole survivor of her family, Rishi has inherited a very profitable trading company. On a routine trip to check up on the business, she travels to Celadon.

While sightseeing, Rishi is able to avert a terrible disaster for Prax’s clan. In the ensuing celebration, Rishi overdoes the potent local wine and causes a crisis for the clan she saved. As a result, Prax ends up travelling back to Subidar with her, but he is a man lost in a maze of a foreign culture and unknown technology. In addition, he's keeping a shameful secret. Rishi, meanwhile, feels terrible for taking him away from his people. But not so terrible that she wants to send him back.


Releasing May 4 from Crimson Fox Publishing. Available in paperback and on the Kindle . Pre-order the Kindle book on Amazon now.  See all my titles here.

Posted by Carmen Webster Buxton at 12:05 AM No comments:

My novel SHADES OF EMPIRE is definitely a space opera, and the original cover reflects that part of the story. The action starts on the planet Gaulle, home of the Gaullian Empire, which is ruled by a despotic emperor. It continues on board a somewhat shady merchant starship, aptly named The Queen Bee. Occasionally the characters visit some remote planets with very loose laws.
However, inside this rather dark space opera are three separate love stories: one involves the woman who owns and commands the Queen Bee; the second happens to a young soldier charged with treason against the empire; and the third occurs when an aristocrat on Gaulle tries to help his younger sister, a co-conspirator of the young soldier. Each of these three find someone as a result of their circumstances or actions. As part of the relaunch, I commissioned a new cover, which I think manages to incorporate both the space opera and the romance sides to the story. Also as part of the relaunch, I have enrolled this book in Kindle Unlimited.
A word to readers: as I mentioned, this book is dark, by far the darkest story I have written. The other characters are generally good—even sometimes heroic—but the villains are twisted, terrible, and often cruel. Be warned!  Here's part of what SFBook Reviews said about this book:

"Set within the same universe as the authors previous novel Tribes, Shades of Empire follows the ex-soldier Alexander Napier, merchant starship captain Madeline Pallestrino and a host of other colourful characters.... While there are a number of romantic elements to the plot there are some much more serious aspects at play... in the wrong hands [these themes] could prove a story-breaker; luckily we are in good hands and the author manages everything in an intelligent and effective manner without once coming across as gratuitous or over the top. Some of the scenes are nevertheless a little graphic and as such this isn't suited to the younger reader, or indeed those who don't like to read about that sort of thing.
So it's not a book for everyone however it is a very well crafted tale that blends some really creative characters into a multi-threaded plot without losing the reader anywhere and the way these are all brought together is excellent."

Posted by Carmen Webster Buxton at 6:37 PM No comments:

TRIBES is only 99₵ for a few days!

My sci-fi romance novel TRIBES is on sale for 99₵ until Wednesday, April 14. Get it now at Amazon! (Also free in Kindle Unlimited!). 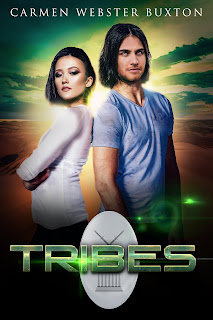 Hob is a slave. Jahnsi is a mercenary, a damsel who never needs rescuing. They both live on Mariposa, a world founded as a prison colony, where all-male or all-female tribes are the only government there is. A person’s tribe demands loyalty and service but provides protection. A girl baby always has a tribe but when a woman can’t find a man to claim her son, she has to abandon him, and the infant can then become someone’s slave.Hob has nothing to lose when he meets Jahnsi. For the first time in a long time, Hob finds first compassion and then something much more. Jahnsi is horrified by the injustice on Hob's life. But as she and her family struggle to keep him hidden and safe, someone from off-world begins a manhunt through Mariposa's slave quarters, looking for a very specific slave.
Get it now on Amazon.
Posted by Carmen Webster Buxton at 3:06 PM No comments: