Character names: Why is he just Willoughby?

Characters' names can have meaning in stories. I try to maintain a pattern to naming characters, when I think it's important to the story. In my fantasy romance Bag of Tricks, I imagined an eastern European setting, so I named the male main character Zarek, a name found most often in Poland and Hungary. But because the female lead was a woman who had wandered far from her home, I gave her the French name Aveline (even though in my fantasy world, her country of origin was north of where Zarek came from. I mean, it is a fantasy).

In the far future, on the other hand, I can see names merging and race and ethnicities blending.  In my science fiction romance Worlds Apart, some of the population of the colony world Celadon are Greek-speaking refugees, who didn't want to be assimilated, and so they lived separately on their new world, keeping their language while forming a new culture. Those characters all have Greek names, naturally, but in some cases I used names from Greek mythology, and the hero is actually named after the most famous sculptor of the classical age, Praxiteles. On a friend's advice, I gave him the nickname Prax so it was easier for readers who didn't have an art history teacher who drilled the name Praxiteles into their heads, as I did.

In the same book, among the strangers who come to Caledon from more cosmopolitan worlds are a man named Hari Ijiomah (a South Asian first name and an African last name) and Rishi Trahn, another South Asian first name, but with a twist because it's a man's name and Rishi is a woman, the heroine, in fact. Trahn is South East Asian, so that gave me even more variety. And for a real mix there is a also a secondary character named Ingrid Nakamura.

I got to thinking about the importance of book character names because in the pandemic-induced isolation, I have been re-reading a lot, including some Jane Austen books. Let me add, if you're inclined to do this, I would not bother with Mansfield Park. I could not believe how prosy and long-winded it is! Pride and Prejudice holds up well, as does Sense and Sensibility, which brings me to my point. In 19th century Britain, there was more formality about names. Only good friends called each other by their first names. Indeed, in Pride and Prejudice, Elizabeth Bennet's parents called each other Mr. Bennet and Mrs. Bennet, at least in front of others. Darcy and Bingley are sometimes Mr. Darcy and Mr. Bingley and sometimes just Darcy and Bingley, especially in conversation. But in Sense and Sensibility, Marianne's love interest is almost always called just Willoughby. There are about a dozen or fewer instances of "Mr. Willoughby" being used but he is mentioned hundreds of times in the books as just plain "Willoughby." Even Marianne calls him Willoughby, not John. I wondered if, having named him John Willoughby, Jane Austen was in some way trying to signal the reader that just-plain-Willoughby was less of a gentleman than her other important characters? He certainly acts badly in getting Marianne to love him, all while knowing he won't ever marry a woman with no money.  I have no way of knowing if Austen did it on purpose, but I did notice the Willoughby difference.

So, do other writers obsess about characters' names? Do non-writers? Just me? Oh, well.

Posted by Carmen Webster Buxton at 3:38 PM No comments:

Musings on my muse: The care and feeding of my inner control freak 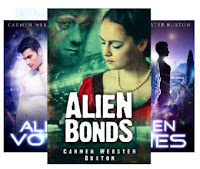 If you met me, you would probably think I'm perfectly normal.  But inside, I do have a quirk that makes me a tad different from most folks: on one level, I'm a control freak. This might surprise a lot of people who see me as reasonably laid back (except when I'm worried about my kids, and then I freak out).

But I'm a different person when I write books. It's not just being a writer that makes me different. Technology has made it much easier to write and to publish, which has revealed that gazillions of folks have that ambition. Some of them write hoping to make money, some write hoping for recognition or fame, and some write because they enjoy it. I write because I want people to read what I have written. Let me stress that—what I have written. What appeals to me writing stories is that by writing them as science fiction or fantasy, I control not only the characters but the setting. I can create my own worlds, each with its own appearance, environment, inhabitants, and cultures. And I can populate those worlds with whatever characters I think would make for an interesting story.

In the Wakanreo trilogy (Alien Bonds, Alien Vows, and Alien Skies), I created a world where  an alien people mate because of biological reaction that cannot be controlled. I wanted to create a society in which sex was completely divorced from morality, and where nudity was not linked to a desire to provoke a sexual reaction. I also foresaw greater equality between the sexes and among socioeconomic groups; because there was no such thing as marriage, either arranged or from affection, and divorce did not exist, class structures were too difficult to enforce. Also, since pairing off was purely pheromone-driven, looks didn't matter. Add to this the question of love; just because you paired off with someone doesn't mean you have to love him or her.

In Tribes, I wanted my readers to inhabit a world where there was one overriding loyalty, at least in a legal sense. Belonging to a tribe was a a life-long and immutable thing. One's tribe provided security, a safety net against disaster, and also determined what was legal for an individual. On the other hand, if someone had no tribe, his life was doomed to slavery, drudgery, and degradation. Interjecting a slave into such a setting provided a way to see how the other characters behave toward him.

But setting a story on another world or in the future isn't the only way to control all the facets of my story. In Hidden Magic, I gave some characters magical abilities, but plunked them down in a society that feared and suppressed magic. I made them brother and sister, and then, because I enjoy a romance, I had each of them find someone they loved.
I don't only read science fiction and fantasy. I enjoy mysteries, historical fiction and historical romance, and even sometimes young adult novels. But I don't think I would ever write in those genres because I would be stuck with the rules imposed by reality.

Posted by Carmen Webster Buxton at 4:12 PM No comments: