Amazon to the digital reading marketplace: Bring it! 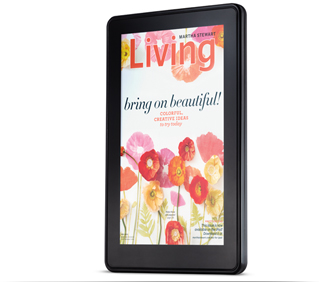 I've had a few days to take in the new line of Kindles, including the Fire, and I have to say I am impressed at how well Amazon has covered the market.

First, an explanation of "special offers," Amazon-speak for ads. All e-ink Kindles can be bought for $40 or $50 cheaper if you get them with ads in place of the usual screen savers of author portraits and line drawings. If you buy a KSO (Kindle with Special Offers), you are also sent emails offering other deals at special prices.  These are most often merchandise unrelated to books, like vacuum cleaners or small appliances. On new Kindles, the home screen (i.e., the list of books on the Kindle) also has the same ad as a small banner at the bottom of the screen.

First in the new Kindle line-up is the bare-bones entry-level Kindle, which sells for $79 with special offers and $109 without. It has wifi but no 3G option, and it has no keyboard and no touch screen. To type anything, you press a "keyboard" key that displays the alphabet on the screen and then lets you move the cursor  to the letter you want. Cumbersome, to say the least!  But if you buy mostly from the web store  and not the Kindle itself, you don't need to annotate or search books, or have them read aloud, it's a great deal. You can still get library books, and the screen is exactly the same size as the other e-ink Kindles.  Plus, it's very light weight. Unlike the Touch models, this one has already shipped, and I found an in-depth review of it here.

Next up is Kindle Touch, which is available in multiple configurations: as a KSO and not, and also as wifi-only or wifi and 3G.  It starts at an incredible $99 for the KSO wifi-only model and goes up to $189 for the no-ads wifi and 3G model. the touch-screen is infrared (IR) not capacitive (like the iPad), but it is said to be very responsive. This has everything the previous Kindle 3 had (now called the Kindle Keyboard) except for the clunky keyboard and the side buttons for turning "pages." It also offers something new called X-Ray, which appears to be a way to easily search inside books for references to characters or events. I'm not entirely certain how that will work.

And last up in the new line-up is the Kindle Fire, which is really a 7" Android tablet running the Kindle app, but Amazon wants to call it a Kindle (which is the same thing Barnes & Noble did with their Nook and Nook Color). It has wifi but no 3G and sells for $199. I find it interesting that there is no KSO version, and also no 3G version. I'm sure one reason there is no 3G yet is that Amazon could not offer it for free; tablet users would use a lot more bandwidth than any e-ink Kindle user, and Amazon could not absorb that cost and make money. In fact, rumor is they're losing money with the $199 price point as it is. But I think that price was set as the one they could make money at if they sell enough of them.

So, here we are. All these models have come out in the same month Amazon announced Kindle library book borrowing. In addition, Amazon is still selling the keyboard models. In having so many model, and pricing the new Kindles so aggressively (even selling the AC adapter plug separately, so they could cut the price of the Kindles) Amazon has said, basically, that they intend to dominate the digital reading market. They're saying to Apple, and Sony, and Barnes and Noble, "Bring it on!"


It worked on me. I have ordered a Kindle Touch 3G with no ads (If I am going to sell my soul to Amazon, I want more than $60 for it).  My one worry is that it won't be as easy to read one-handed as it is with my K3, but if that proves problematic, I will give it to my husband and take back the K3 he is about to inherit.