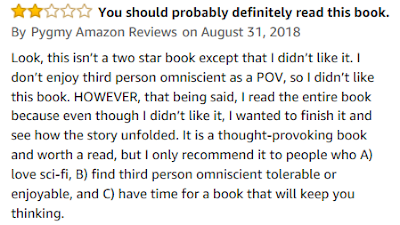 The review of Alien Bonds above is interesting because it's actually an excellent review but the reviewer opted to give only 2 stars. This is certainly his or her prerogative. I have taken away stars in reviews for an ebook that was badly converted and full of typos (although never for a living author). And in this instance the reviewer made it clear the problem was not bad writing or a dull story, but simply the point of view from which the story was written.

As someone who cannot read a present tense novel, I can empathize. Some writers like present tense because they think it's more immediate.  It's supposed to make the reader feel like the story is happening now. I can tolerate present tense when it's used intermittently, to show different timelines, for example; but after a while, present tense is like fingernails on a chalkboard to me. I just want it to be over. If the whole novel is present tense, I simply don't try to read it.

I will say that while the entire narrative of  Alien Bonds is certainly third person, I don't know that I would call it omniscient. I try to be sure every scene is in someone's point of view. There are at least three POV characters; I would have to read the book again to guarantee there aren't more. In the sequel. Alien Vows, there are five. I know some readers don't like "head hopping" from character to character, but the longer the Wakanro saga goes on, the more complicated it gets. I prefer to change the POV character and not have that person relate what happened later, in the main character's presence. To minimize the sense of head-hopping, I tend to write in a not-that-close third person, which may be why the reviewer saw it as omniscient.

Anyway, kudos to Pygmy Amazon Reviews for sticking with my book! It's the best review I ever got from someone who didn't enjoy reading the book.