WORLDS APART launched today! Here's a snippet-- and May the 4th be with you!

My 18th title Worlds Apart is now for sale on Amazon, as both a paperback and a Kindle book!  Here's a snippet from Chapter 2.

Background:  Rishi Trahn is wealthy and powerful but she has no surviving family. While travelling on business she stops at the planet Celadon and goes sight-seeing on the wide-open plains. Her group stumbles across a tragedy in the making as a clan of nomadic herders is being attacked by ruthless bandits with superior weapons. To prevent a massacre, Rishi orders her ship, in orbit around Celadon, to fire on the bandits which kills the leader and makes the rest run away.

After the mess is cleared up, the herders invite Rishi and her staff to a feast in her honor the very next day. The herders all speak Greek, but one young man in the Mercouri clan can translate. His name is Praxiteles. He repeats what his clan leaders say, but no one tells Rishi how potent the local wine is. 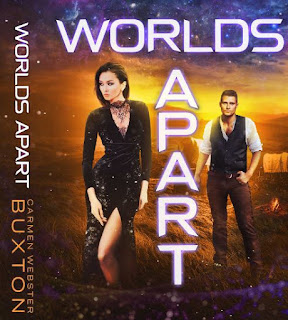 “Come, please, lady,” Praxiteles said, holding out his hands in a welcoming gesture, “and all your clan.”

Rishi debated trying to explain the concept of staff, but opted instead to smile and follow his lead.

When they arrived in the middle of the Elliniká encampment, she saw that a series of tables had been set up to form a huge square. A large bonfire had been lit in the center of the square. The combination of firelight and assorted lanterns hanging from poles illuminated the scene well, but the light flickered a good deal. Everything had multiple shadows.

The Mercouri had assembled, but waited by their stools and benches. Rishi decided there had to be at least a hundred people ready to sit down to dinner with her, maybe more. The tables were already loaded with food. It was, indeed, a feast.

Rishi wasn’t certain because she had been busy helping the day before, but she thought everyone looked more formally dressed. Most of the women wore long dresses, although some of them wore trousers underneath shorter gowns. The men wore vests or short jackets over their shirts, and it looked as if every one of them had polished his boots. Almost all their clothes were in shades of white, brown, or gray, but occasionally, a kerchief or a blouse matched the pink or orange of the wildflowers Rishi had seen on the plains. It occurred to her that they must not only sew their clothes but weave the fabrics from which they were made.

Achilles walked her to a seat. They put Hari next to her on one side, with Praxiteles on her other side to translate. Achilles sat across from Hari, and Eugenie sat across from Rishi. Everyone else gathered around and found their places, including several of the Golden Hawk’s crew who had helped the day before. There were a few minor altercations over who sat where, but eventually everyone had a seat. Even some older children were included in the event.

Young women brought around platters of grilled meat, and everyone helped themselves. There were bowls of fruits and vegetables on the tables, none of them familiar to Rishi. Praxiteles took a tiny loaf of crusty bread and tore it in half before taking a bite. Rishi did the same. It was good, although it tasted nothing like any bread she had ever had.

A smiling young woman filled Rishi’s cup with a deep red liquid. Rishi took a sip. It had to be wine, a slightly dry wine, with an almost bitter aftertaste. It was quite nice once she got used to it.

The food was good, and Rishi was soon full. She didn’t want to give offense, but she had to turn away more and more platters as they were offered. At Achilles’ urging, as translated by Praxiteles, she tried a hard, chewy cake that managed to be both sweet and salty and made Rishi very thirsty. She drank more of the red wine.

A young woman stood up holding a stringed instrument with a curved bottom and a long straight neck. She played while she sang what sounded like a very sad song. Rishi leaned her head towards Praxiteles and noted the faint aroma of wood smoke. She whispered for him to translate for her. He bent his head even nearer and told her that the song was about a woman whose mother put her on an island in a river, to keep her apart from her sweetheart. The young man drowned trying to swim to her.

“How tragic.” Rishi felt very strange, not light-headed exactly. It wasn’t that she felt bad. On the contrary, she felt wonderful—happy and lighthearted. She smiled at Praxiteles as she sipped her wine. The firelight gleamed on his hair and made it look like burnished gold. His blue eyes smiled back at her, and Rishi studied him covertly.

After the young woman finished singing, everyone applauded, and she started to play again, a more cheerful song this time. Several men got up and danced to the music. They started slowly, arms linked together, legs lifted in unison, stepping carefully around the bonfire. As the rhythm got faster, their dancing got faster and unrestrained, and the audience’s enthusiasm kept pace. By the time the dancers finished, there was wild cheering. Rishi applauded along with the Elliniká. She felt more than wonderful. She felt that she could do anything she wanted.

Achilles got up and stood so he was facing Rishi. “Noble lady,” he said, in loud but terribly accented Standard. “We wish to offer to you our most heartfelt thanks for our deliverances.” From the stilted way he spoke, Rishi decided he must have memorized the words with no real idea of what he was saying. He paused, and Praxiteles translated his words into Elliniká. “We want you to know that every man, and woman, and child among us gives thanks to you.” Praxiteles translated again, and there was a murmur among the audience as if they were agreeing with their leader.

“We offer to you our hospitality without condition,” Achilles went on. “If there is anything ever we can do for you, most noble lady, we beg that you will ask us to do it.” Praxiteles translated, and Achilles bowed low to Rishi before resuming his seat.

Rishi decided she should respond. She stood up and bowed back, and then straightened up and surveyed the many faces that all looked at her so respectfully. “I thank you all,” she said, still feeling that wonderful sense of exhilaration, “for making me so welcome. I’m sorry my ship has to leave this evening, or I should be pleased to visit again. You don’t need to thank me.” She waved one hand in an expansive gesture. After all, she could do anything. What were a few lightning bolts to someone like her? “There’s no reason for you to feel indebted to me. It was nothing.”

After Praxiteles translated Rishi’s speech, Eugenie jumped up and spoke rapidly in her own language.

“Noble lady.” Praxiteles translated her comments. “The Mercouri are indeed in your debt. I, the Mercouri, say this, and I beg that you will believe me. We would do anything—give you anything—that you asked of us. If we have it, you have only to speak, and it is yours to keep.”

“All right,” Rishi said, smiling. It was nice that they recognized how wonderful she was. And after all, there were things she wanted. Still standing, she laid one hand negligently on Praxiteles’ shoulder. “Since you insist, I’ll take him.”