I find it interesting that this newest Mars rover is getting so much more press than the previous ones did.  I suppose Curiosity is inherently more interesting because it can do more. It's bigger, too, car-sized rather than being compared to a glorified Roomba or an automated lawn mower.

Its also funny that Curiosity has come down in the Gale Crater. I know it was named after an astronomer but when I hear the name Gale, I think Dorothy Gale of Kansas, who had her own kind of curiosity. But whatever the reason, this latest rover has made us all talk about space travel again, and I think that's good! 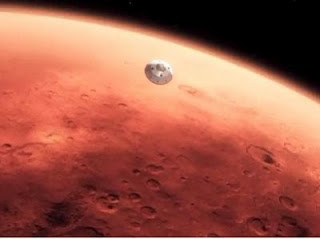 Maybe NASA should have named it Kirk, because it's going “where no man has gone before. . . ”