I'm doing final corrections on Alien Vows, getting it ready for launch, but I stopped to take stock of my "stack" of manuscripts.  I put the word in quotes because the stack is digital; the books exist only as files on my hard drive.

I have been writing seriously since 1992, but I didn't start self-publishing until 2011. Since then I have published nine (soon to be ten) novels and one novella.

Fantasy
Bag of Tricks
The Return of Magic

The next one in line to publish will undoubtedly be Alien Skies because I want to finish the Wakanreo series. After that I need to decide which direction I want to go. I might alternate, and do a fantasy next and then a science fiction romance, and then repeat. This Nameless World will probably go to the bottom of the list because it's currently at 240,000 words, the longest book I ever wrote.  That's about twice as long as most of my novels, but I don't think I can split it into two books because there's no resolution point in the middle of the book.

In contrast, I have also written six short stories. It's not that I was trying to write mostly novels;it's that the stories that started in my head were mostly novels. Go figure! 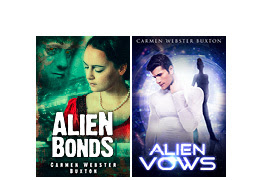 Posted by Carmen Webster Buxton at 1:18 AM